Its community partnership approach supports men to change their behaviour, reducing the likelihood of further harm. Nearly 60% of men who have been through the programme have stopped reoffending in this way.

There are currently three Gandhi Nivas houses in Auckland; the goal is to have them around the country.

How Gandhi Nivas got started

Our genesis lay in talks between Counties Manukau Police and its South Asian Police Advisory Board that wanted to address the problem of family harm in the South Auckland community.

Advisory board member Ranjna Patel – also the cofounder of the Tāmaki Health GP network – decided to set up the Serenity Foundation to support and fundraise for a new service to be called Gandhi Nivas (meaning home of peace).

Sahaayta Counselling and Social Support came on board early with its team of registered counsellors, social workers, alcohol and drug practitioners, support workers and volunteers who work in the Gandhi Nivas houses. The mens' whanau are also offered support.

Gandhi Nivas helps people of all ethnicities. See our results

A key aspect of family violence intervention is engaging offenders in their own rehabilitation. Gandhi Nivas helps men take a positive role in stopping violence against women.

To reduce offending, we work to educate each offender about the consequences of their action, challenging them to accept responsibility and helping them to seek support in changing their behaviour.

Men referred to Gandhi Nivas have been issued a police safety order* following an act of family harm. Families do not have to leave their homes because men are offered free counselling and emergency within 24 hours of referral. Some men who are concerned about their own actions also self-refer to Gandhi Nivas.

As well as providing men with a safe environment where they can do no harm, we offer them free counselling and support with referrals to social services.

As awareness of our service has grown, we also have some men who use violence referring themselves to Gandhi Nivas, recognising that they need help.

*If a man is issued with a police safety order he must leave the home for a set period of time as determined by police.

Get the Gandhi Nivas Brochure

Gandhi Nivas takes its inspiration from the approach of Mahatma Gandhi – a man of peace – for services that are available to all ethnicities.

Our symbol is the lotus flower – representing growth over adversity – because it finds its way out of its muddy roots to rise up and blossom.

To date, we have helped men from 19 different ethnic groups in Tāmaki Makaurau.

Our Advisory Board oversees the work of Gandhi Nivas and includes representatives from Serenity Foundation, Total Healthcare PHO, the New Zealand Police and the Accident Compensation Corporation. 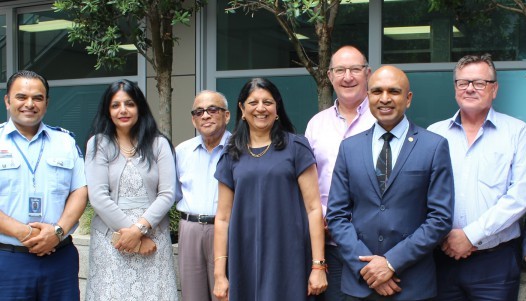